There has been a lot going on in the interior design world this week, first we shared the news of Cynthia Rowley creating a paint palette designed after her read-to-wear fashion line. Now there’s news of two celebrity home lines as well as a new shelter magazine.

Estee Lauder heir Aerin Lauder and Food Network Star Sandra Lee recently revealed their plans to launch home lines in spring of 2012 respectively. Lauder plans to make things easier for consumers with her line Aerin by providing what they are looking for. Lee’s goals are to help customers live their lives simply and beautifully.

Soon after hearing about the new home lines we learned of the new shelter magazine. Hearst is teaming up with HGTV to launch HGTV Magazine. The press release states that the magazine will provide “personal tips, tricks and expertise, as well as a behind-the-scenes look at their shows.” The magazine headed by former Coastal Living editor Sara Peterson will hit stands this fall as Hearst’s fifth shelter magazine.

What are you thoughts on the latest interior design news? 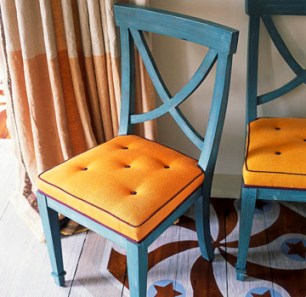 Design by The Decorative Touch Featured in KCH&G

Tip of the Week #14: Colorful Inspiration

From the Runway to Your Walls

Gifts That Will Keep On Giving

Houzz
From the Runway to Your Walls